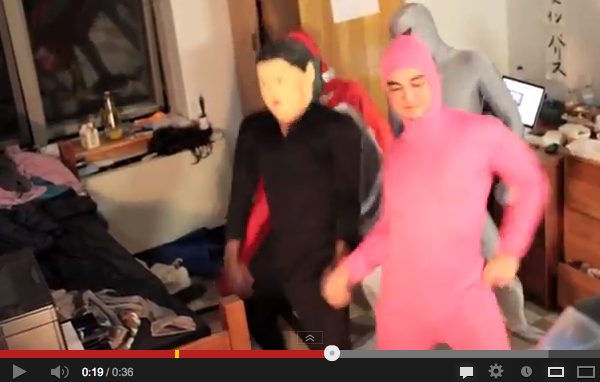 Why am I Harlem Shaking?

I’m going to keep this short and sweet, since you and your friends are probably mid-harlem shaking.

What is the Harlem Shake: Everyone is beyond confused to hear constant reference to the old dance move, the Harlem Shake, but that is not what everyone is talking about. The new Harlem Shake is a viral internet video meme that has swept the internet for the entirety of the week. It is a 30-ish second video of people dancing to the song “Harlem Shake” by Baauer.

How did it start: Famous YouTuber Filthy Frank made the original video that was posted on February 2nd. Then, on the same day, 5 popular longboarding-teens of The Sunny Coast Skate crew from Queensland, Australia posted their silly version of the video, and the rest was history.

What it entails: Most people who have uploaded their videos (which, the rate that people are posting them is unbelievable – there were 40,000 videos uploaded from feb 10th through feb 15th) used the Australians version as reference. You use the same song, and the video starts with a masked person dancing for about 15 seconds of the video. The catch is that no one else seems to notice that the original dancer is doing anything until the beat drops: that’s when the party starts. Clothes are gone, people are in sleeping bags, upside down, and seemingly letting loose more than they had ever before.

Why it’s viral: Some meme’s that go viral really make no sense, but this one was made of the perfect formula. It was short (only 30 seconds), funny, had no language barrier so anyone could participate, and could be executed in just about any way and still fit the mold. The mold is so loose that anyone can do anything and it would still work.

What to do now: This is not over, although many would like to think so. Because this all happened so fast, people are all making their goofy versions of the video RIGHT NOW, as I type, and I don’t think it’s going to stop anytime soon. Make one if you’d like, but don’t expect it to be as amazing as this one.

They’re honestly really fun to make. Everyone will be pissed you did, because there are just way too many out there for such a short amount of time – but it’s insanely fun to see people dance the way they do. This is the one we made at work, and I could have never imagined that the people I work with could get down like dat.

Moral of the story: everyone go to bed and pray that we make it through this craze. The sun will rise – we will forget about this one day.