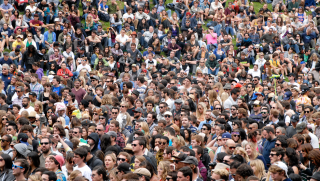 How To Be Nice(r) To Strangers

I have been in many social situations lately where I’ve been thrust into the feeding frenzy of meeting new people. Very few people, even those who categorize themselves as extroverts, thrive on meeting new people and mingling. Even if I don’t LOVE it, I’d like to say I handle myself quite well, as I hold manners and making people feel welcomed very highly on my list of YAY’s.

Through these countless situations, I have began a mental note of things we do (consciously and unconsciously) that make us seem arrogant, uninterested, or just plain mean. The beauty of this comprehensive list is that it’s applicable to all types of people: introvert, prom king, hip hop dancer, milk man, and the class clown. This list also covers all types of stranger interactions, from waiting in line at Chipotle to accompanying a friend to a party where you quickly become the lone wolf.

Alas, the simple steps towards being nice(r) to strangers:

1. First of foremost- ALWAYS remember that this social interaction (shopping at Nordstroms, sitting at a restaurant, being in an airplane, etc.) has an end point and will not take up the rest of your life. If you truly remember that, you’ll be more apt to give each interaction your full attention. The chances you see some of these people again are minuscule  and the only way people will remember you will be if you had a positive or negative interaction. Give people the attention they deserve. This too shall pass.

2. Keep a smile on hand at all times. Many people enter rooms with faces that reflect their fear of interaction, with a scowl or absolutely no emotion at all. If you prepare your smile prior to walking through a door, it’s equipped and ready to be contagious. Who wants an unknown grump to walk into their home? Nobody. But who wants that smiling person? ME.

3. Be the first to introduce yourself. Everyone knows the harrowing feeling of standing in a group of 3-5 people while most of them know each other- except you. Stop wondering who will be the only nice one in the group to introduce themselves- DO IT FIRST. An easy lead in? “I don’t believe we’ve met, I’m _____.” Done. Tension broken.

4. Shake peoples hands (or hug if you’re feeling CRAZY). Don’t do the TERRIBLY AWKWARD FOR EVERYONE gesture where you literally wave at each other from 5 feet away. MOVE YOUR FEET PEOPLE.

5. Eye contact. Make it. I don’t know when exactly the turning point is in life, but people now refuse to look into each others eyes. Do you know how much more strife you bring into the situation if you’re the shifty-eyed weirdo who can’t look into the eyes of the person in front of you? I mean, don’t burn a hole in their retina with your unlocked stare, but look people in the eyes because it shows that you’re interested in what they are saying, even if it’s the guy at chipotle asking “Brown or White.”

6. Put down the phone. I am 100% guilty as charged with this one. In uncomfortable situations, we are first to whip out our phones like we’re expecting POTUS to call- obsessing over our missed calls or any possible text conversations we can muster up. When you have your phone out, you’re basically telling everyone around you that you’re uninterested. Put it away- you’re not that important and you’re missing out on the conversations you could be having with real people that are constantly around you.

7. Be the first to ask questions (this goes for introverts too!) Imagine you’re in a group of 4 and 2 of the people are in a conversation, where you quickly find you and the other person literally watching a conversation happen. Start one of your own! If you are uncomfortable talking about yourself, what better way to avoid it than ask questions about the other person. A technique I often use is what I like to call the Interview Technique: ask where they’re from, what they do, and what they did earlier today. It’s a triple whammy- you learn about someone new (and make them feel valuable while doing so!), you don’t have to talk about yourself, and you get to brush up your interviewing skills.

8. Laugh. Even if it’s not always funny. The worst thing that happens in casual/quick conversations is when the other person, while talking, starts to laugh at something they say. You have no clue what’s happening or why they think it’s funny, but you cut the tension in half if you join them in giggling. This also goes for when you’re in line waiting for Chipotle and the coocoo lady in front of you makes some weird comment (to herself), laughs (at herself), and then suddenly includes you in her one-sided convo by looking at you. JUST SMILE OR GIGGLE OR SOMETHING. Quick.

9. Compliment people instead of judging them. This happens far more than it should. Some girl walks into the room and you immediately scowl because you’re jealous of how pretty she looks in that indie dress that you think you could never pull off. Of course, she ends up walking right past you and you don’t notice that you’re still scowling at her. She looks up, sees your face of disapproval and “screw you” and keeps walking. Interaction over- and it was terrible. COMPLIMENT HER DRESS! Stop being selfish! When she walks by, stop her and comment on how much you love her dress. Girls can be friends too! Who knew.

10. Lay down your too-cool pride. I believe that 100% of interactions (with friends, family, or strangers) can be improved by laying down your pride. Stop thinking that you deserve to be approached- approach people. Take off the blank look on your face that says you don’t really want to be here- smile. Don’t wait to be spoken to- speak. Engage. Create the positive interactions that you want to happen for you, because you’ll notice that once you reach out and initiate, even if you had to do it, the interaction is already worthwhile. Sure, you have to laugh at a few jokes that you don’t really enjoy, but you made somebody’s day. Put down the phone, smile, and make a new friend.