THE JONAS BROTHERS ARE COMING HOME!!!! And by home, I mean back to Earth. The only comparable scenario I can think of would be if you were a parent, and your son was gone for a week without notice. You’d be worried sick, but parts of you wouldn’t want to ask where he’d been because it might only make the matters worse. You yell at them, hug them, and welcome them home.

That is how I feel that the Jonas Brothers are taking a crack at their family rhythms again. Here is their new music video for their hit single, “Pom Poms” which was released today.

I could go on for days about how I feel about it, but I’ll root for simplicity and give it 5 thumbs up.

Things you need to know: 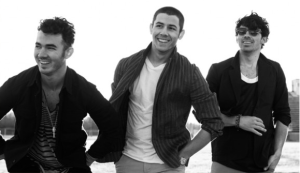 What else is happening in the world of music?